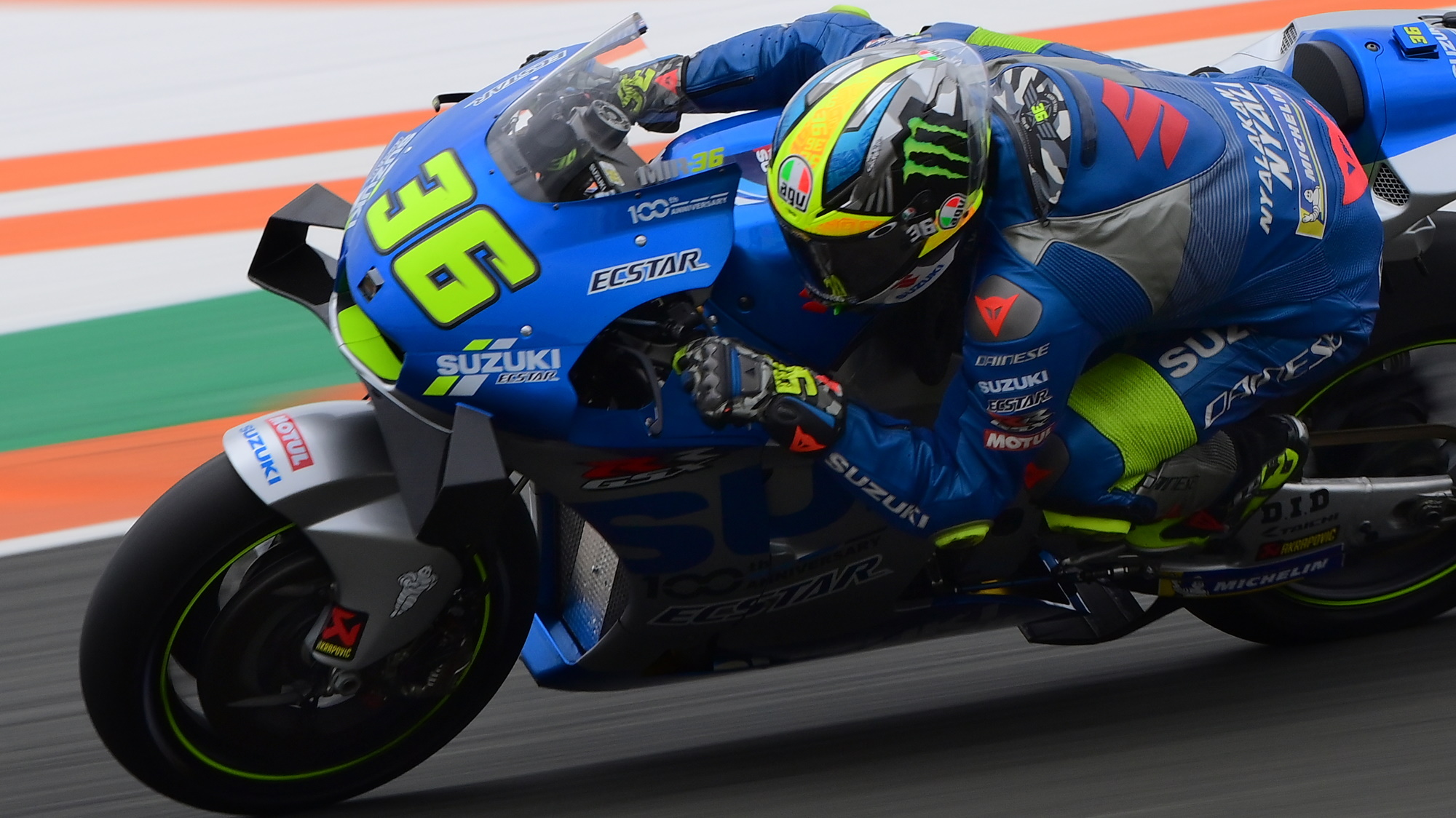 With the riders’ title in the bag, Joan Mir could set a unique piece of MotoGP history today – read on for full details on how to watch all the Portugal GP action online with a MotoGP live stream, no matter where you are in the world right now.

The Spanish rider could potentially become the first to end the season as champ, despite only winning just a single race during the campaign. Despite finishing in seventh during last weekend’s Valencia Grand Prix, the Suzuki star sealed the title after Fabio Quartararo, Maverick Vinales and Alex Rins all failed to reach the podium.

The final race of the 2020 season takes place at the Algarve International Circuit and gets going at 2pm local time (WET).  That also makes it a 2pm GMT start for fans watching from the UK and an 9am ET / 6am PT flag for those in the US. Get your local MotoGP live stream wherever you are with the help of a VPN.

As well as providing something of a victory lap for Mir, the final race of the season also looks set to see some significant farewells.

The race is set to provide an emotional bookend to Valentino Rossi’s incredible time at Yamaha, with the legendary Italian star swapping places with Fabio Quartararo at Petronas SRT next year.

It’s the end of an era for Cal Crutchlow and Andrea Dovizioso, with neither of two riders set to feature on the MotoGP grid in 2021, with the former set to become Yamaha’s test rider and the latter taking a well-earned year out.

Follow our guide below as we explain how to watch the Portuguese Grand Prix and get a MotoGP live stream from anywhere in the world this week.

How to watch a MotoGP live stream from outside your country

To see how you can live stream the MotoGP action in the UK, Australia (where coverage is free), the US, Canada and New Zealand, read on further down this page to see the broadcast options. But if you want to stream the riding from outside your country, you may find that it’s geo-blocked.

That’s where a VPN can come in really handy. It’s a piece of software readily available to download and install that allows you to simulate the IP address on your laptop (or mobile phone, tablet, streaming device, console, etc) so that it appears to be in a completely different country. Ideal, assuming that it doesn’t breach any Ts&Cs from the broadcaster you’re trying to tune in to.

Use a VPN to stream MotoGP live from anywhere

ExpressVPN is the world’s top VPN right now
We’ve taken the time to try out all the biggest VPN providers and we found ExpressVPN to sit at the front of the grid. It works with lots of devices and offers super fast connections across its many servers.

ExpressVPN is the best all-round VPN for streaming at (appropriately) excellent speeds – and perhaps best of all, it has a 30-day money back guarantee plus 3 months FREE when you subscribe for a year.

MotoGP live stream 2020: how to watch MotoGP Portuguese Grand Prix in the UK

BT Sport have been showing all the MotoGP action this year live on TV via BT Sport 2. Subscribers can watch BT Sport online, either directly through its website or by using the BT Sport app – available for iOS and Android as well as on consoles, Apple TV, Now TV devices, and select Samsung smart TVs.

For those who don’t want the commitment or cost of a full-fat BT Sport subscription, there’s now a BT Sport Monthly Pass option, which let’s you pay £25 and cancel whenever you want.

Coverage of the main event is scheduled on BT Sport 2 for 1.30pm ahead of a 2pm GMT start in the UK. Full coverage of qualifying and practice sessions is also on BT Sport.

If you’re BT Sport subscriber but find yourself outside the UK this Sunday then you’ll need to download a VPN and follow the instructions above to live stream the action.

FREE MotoGP live stream: how to watch the Portuguese Grand Prix in Australia

You’re in luck Australia, as MotoGP is set to be streamed on Network 10 and Fox Sports. So hopefully, there’s an option in there that’s either already paid for by your current subscription – or one that you can get access to easily.

Network 10 is your best bet if you don’t have a fancy pay TV package, as it’s airing the MotoGP Valencia Grand Prix (this Sunday night/Monday morning at 1am AEDT) live for free.

Both offer apps and streaming platforms for a range of popular devices, so you shouldn’t miss a second of the action, no matter where you are at race time. Of course, you’ll need a VPN if you want to watch your home coverage outside of Australia, and our testing shows that NordVPN is your most reliable option to use for streaming 10 Live.

For US race fans, it’s NBC Sports and NBC which will be showing all the action from the Portuguese Grand Prix. So if you have that on cable already, you’re all set and can watch via the network’s website – just log-in with details of your TV provider. The Valencia Grand Prix is set to begin at 9am ET/ 6am PT on Sunday morning.

Cord-cutters can watch NBCSN on Sling TV, where it’s available as part of the over-the-top service’s Blue bundle. You can even try a FREE Sling trial that will let you watch this week’s race without paying a penny, if you play your cards right.

Out of the US and want to watch your home coverage? No worries – just use a VPN as described above to stream all the action just like you would back at home.

2020 MotoGP Portugal Grand Prix live stream: how to watch the race in Canada

Canadians can enjoy the motorbike racing action on beIN Sports which has the rights to the races for 2020. The race is set to begin at 9am ET/ 6am PT on Sunday morning.

For those travelling, you can use a VPN to change your virtual location and still enjoy the race as if you were back in Canada.

In New Zealand it’s Sky Sports that has bagged the rights to show all the 2020 MotoGP live, including this weekend’s action from Portugal.

Kiwi motor racing fans have a late night ahead of them, though, as the Portuguese Grand Prix is set to begin at 3am NZDT in the early hours of Monday morning.

And remember, you can take your coverage with you wherever you are in the world  simply by using one of our best VPN recommendations.

Thanksgiving on track for a record $6B in US online sales, says Adobe – TechCrunch

What are the most expensive Lego sets that might have Black Friday deals this year?
Nvidia RTX 3060 Ti Founders Edition leaked pics show a GPU built much like the RTX 3070
Comment